up next:
now reading: Why Kevin McCarthy Is Best Suited to Be Speaker

Why Kevin McCarthy Is Best Suited to Be Speaker

America faces a host of serious threats today.  Some of them are external, such as Russian aggression and global terrorism, but some of them are internal.  But no threat is more destructive to conservative governance than the mounting divisions among House Republicans.

In foreign affairs, it is always desirable to face divided adversaries.  When they are feuding among themselves, they are distracted, less capable, and not focused on achieving their goal.  Yet that is precisely what House Republicans have been doing, and President Obama and congressional Democrats benefit from it.

It is true that politicians have always been full of ego and personal ambition.  None of us would run for office without it.  But several factors, including new forms of instant communication and the empowerment of outside groups, have given some of those egos more opportunity to push a personal agenda without the restraints existing in years past.

At its foundation, effective politics necessitates working with other people.  And successful political leadership means that one is able and willing to work with others and submerge personal agendas in order to achieve a greater goal.

Every member of Congress has some skills or they would not have been elected in the first place.  But only a few have what it takes to lead a group of energetic, self-assured men and women with strong personalities and political views.

I have witnessed a lot of leaders and would-be leaders in Congress over the last three decades.  None of them has had a better combination of skills to lead the House Republican Conference at this time than does Kevin McCarthy.

He listens eagerly and patiently, and seeks others’ guidance, but he also knows when and how to decide.

He uses business skills for planning as well as metrics to objectively assess progress, but he can also be flexible to rapidly changing circumstances.

He knows politics is a people business, and he is dedicated to helping each individual further his or her personal legislative goals.

He uses those skills to advance a Reaganesque conservative agenda and recognizes that progress is often made a step at a time.

Most of all he is focused on how to make the team a success, regardless of who gets the credit.

A big part of a speaker’s job involves national security, and Kevin has taken the time to travel, get to know key foreign leaders, and study the issues, consulting regularly with outside experts, such as former Secretary of State Condoleezza Rice.  He sees alarming parallels between America today and America in 1979, and pushes an approach to national security that recognizes that peace and security require a strong American military and a genuine commitment to our allies.

In short, Kevin has a unique set of personal skills and the preparation that fit the job and this moment in history.  He is ready to be the speaker House Republicans need right now.

The more difficult question is whether House Republicans are willing to be led.  As with any group of people joined in a common cause, there must be leadership and teamwork.  The American military could never conduct a successful operation if they were attacking each other.  The same holds true for House Republicans.

And all of this internal turmoil takes place at a time when the United States faces enormous challenges here at home and around the world.  With President Obama aggressively pushing his domestic agenda but retreating from the traditional role the U.S. has played in the world over the last 70 years, the need for congressional Republicans to be unified and effective has never been greater.

It is not a game; the stakes are high. McCarthy is ready to lead.  Will House Republicans be willing to put the good of the country first and follow?

Mac Thornberry, a Republican, represents Texas’s 13th Congressional District in the House and is chairman of the Armed Services Committee. 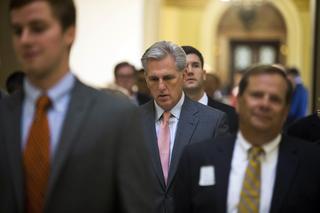 Congress Votes to Keep Government Open
James Arkin
America faces a host of serious threats today.  Some of them are external, such as Russian aggression and global terrorism, but some...