up next:
now reading: Congress Votes to Keep Government Open

With just hours to spare before what would have been the second government shutdown in three years, Congress passed a stopgap measure Wednesday funding the government through mid-December.

The measure passed easily in the Senate, 78-20, with 32 Republicans joining all Democrats in voting for the measure. Sens. Marco Rubio and Lindsey Graham, both presidential candidates, missed the vote. The continuing resolution (CR) also passed easily in the House, 277-151, but only 91 Republicans joined all Democrats in supporting it, while all no votes were from GOP members.

A half dozen Republican representatives hoping to win House leadership positions next week were split on the issue, with half voting in favor of the CR.

The measure funds the government for 10 weeks at levels consistent with the mandatory spending caps known as sequestration that were imposed in 2011. It also includes the normal annual funding for Planned Parenthood, which has been a source of contention with lawmakers for months and, just a week ago, appeared poised to cause a government shutdown.

That shutdown threat came as hard-line conservatives in the House were threatening to try to remove Speaker John Boehner from his post if he allowed Planned Parenthood to be funded in the CR. Boehner’s surprise retirement announcement last week took that leverage off the table, clearing the road for the CR to pass without defunding the group.

But the vote was especially difficult for the candidates running for House Republican leadership positions in the wake of Boehner’s resignation. Conservatives who were threatening Boehner’s speakership voted against the CR, and several of them suggested the vote might affect their considerations in elections Oct. 8.

Majority Leader Kevin McCarthy, the frontrunner to replace Boehner, voted for the continuing resolution and his only announced rival for speaker, Florida Rep. Daniel Webster, voted no. Whip Steve Scalise, running for majority leader, voted for the measure, while his opponent, Rep. Tom Price, voted against it. And the whip candidates split as well, with Reps. Pete Sessions and Dennis Ross voting against it, and Reps. Patrick McHenry and Markwayne Mullin voting yes.

“I’m not a single issue voter, but I think it’s the first gut check,” Rep. Mick Mulvaney said the day before Wednesday’s vote. “And I want to know why, if you vote for it.”

Rep. Raul Labrador told RCP he also wouldn’t vote for leaders on one issue alone, but said the CR and Planned Parenthood would factor into his decision. Rep. Justin Amash said it would be “a big factor” in his considerations.

Rep. Walter Jones, who said he is supporting Webster, not McCarthy, for speaker, told RCP how leadership candidates voted on the CR would be a litmus test for him and many conservatives. He had yet to decide between Scalise and Price for majority leader.

“With outside groups, they would be very concerned about anyone in leadership who would vote for this bill knowing this bill has funding in there for Planned Parenthood,” Jones told RCP before the vote.

In the Senate, Majority Leader Mitch McConnell didn’t have to contend with a group of conservatives pushing to shut down the government rather than fund Planned Parenthood, but with just one: Sen. Ted Cruz. The Texas Republican and presidential candidate had promised for weeks to use “every procedural tool available” to block Planned Parenthood funding, and attempted procedural maneuvers earlier in the week to attach provisions related to that funding and the Iran nuclear agreement to the CR. He was rebuffed, however, and the measure passed easily.

Immediately after passing the stopgap measure, McConnell moved on to the annual appropriations bill funding the Department of Veterans affairs, one of the measures the chamber had been unable to pass earlier in the year due to threats of Democratic filibusters. Even though the regular appropriations process had broken down, McConnell teed up the vote to force Democrats to once again filibuster an appropriations measure.

“Americans are ready to see Democrats start supporting — not blocking — the very bipartisan funding legislation Democrats previously voted for and bragged about in press releases,” McConnell said on the Senate floor, referring to the bill passing the Appropriations Committee in May. “It's true that moving forward will require Democrats to definitively turn the page on years of bad habits and dysfunction, but it's the right thing to do for our country.”

Democrats, who are seeking a long-term solution to the budget caps, are likely to block that measure now that a stopgap funding bill has passed keeping the government open. McConnnell said earlier in the week that they had begun laying the groundwork for budget negotiations with an eye toward a two-year deal that would avoid another crisis in 2016. Minority Leader Harry Reid said Wednesday he was pleased McConnell had signaled an intention to enter discussions for a solution that could potentially lift spending above the mandatory caps.

“We have a lot to do in the coming weeks and months. And we certainly don’t have time for any more manufactured crises,” Reid said. “I sincerely hope Republican leadership will instead choose to do what is right and work with Democrats to meet our country’s obligations. 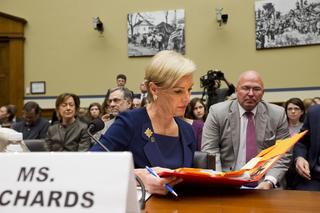 The GOP is Overmatched
David Harsanyi
With just hours to spare before what would have been the second government shutdown in three years, Congress passed a stopgap measure...
Comment
Show commentsHide Comments
RCP Log In | Register